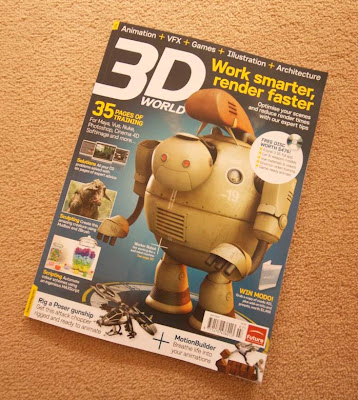 After a long wait, my article on working efficiently has finally come out in 3D World. Although I am proud of the article, I did write over 4000 words in the end, which got massively cut, and obviously some things get lost in translation, dulled down or just re-written by someone. I did get a chance to check it but looks like I missed a few things as it was the day before the deadline, so I thought I'd make a few minor amendments on this blog. If you do get a chance to read the article, let me know what you think (or if you spot any more mistakes :) ) 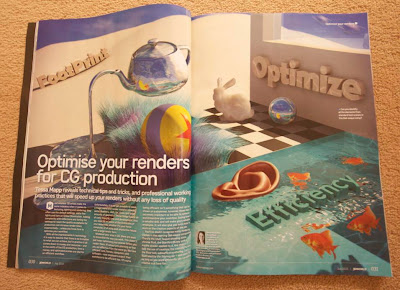 Raytrace versus shadow maps. In the black box... "you'll notice that when you've got a hard edge shadow there's no benefit to using raytracing, and that's when using shadow maps as a cheat becomes more viable" I didn't write this, as I prefer to leave the reader to observe what is going on and make a decision for themselves. It is also wrong or at least very misleading. I would never say shadow maps are a cheat! and I would say that there is more benefit in using shadow map for blurry shadows (surely anyone can see that from the images shown) not for sharp ones, well that is what I deduce from the data. I would also say that map resolution and samples is a balancing act to get the most efficient settings. I think some people just want you to tell them the best thing to do, without them actually having to engage their brain :) unfortunately, it's not possible as every situation is unique, it is just one of those things you get a feel for after a while. 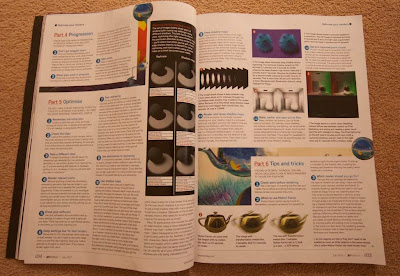 Also I'd like to point out that the ray traced version has max depth 2, (You can see the lit up floor with shadows reflected in the blinn ball surface) making it slower than the most basic scene, something you don't need to worry about with shadow maps as it is pre-calculated. Anyway the point I am trying to make is that raytracing can easily get more complicated with reflections and refractions, but shadow maps stay simple, and when re-used are very efficient.

Deep shadows, "faster than having ray traced motion blurred shadows" I personally can't verify this as I have never tried it, normally I just use shadow maps without motion blur on, as it is pretty wasteful (I did inform them of this). Again, I did't write it. Please let me know what you think.
Posted by tessa at 16:41